Refactor is the next generation of controller board software stack installation.

It is meant to simplify the lives of new users when they begin using a Thing-Printer controller board. Pre-built images of Refactor are available for users who want to get up and running quickly with Replicape or Recore.

Refactor is available for Replicape and Recore, with updates being propagated simultaneously for both platforms.

The latest images for Recore and Replicape are available from github: https://github.com/intelligent-agent/Refactor/releases

The Recore version is based on Armbian, Debian Buster. On top of that, Refactor comes preinstalled with a stack of programs to simplify setting up a new controller board.

The Replicape version of Refactor is based on the BeagleBoard official Debian Buster console image. with a stack of programs to simplify setting up a new controller board.

It can be a good idea to test the board on the bench before installing it in the printer. Use the USB-C connector to power the board.

Once the board is powered up, use a computer to access the web interface provided by OctoPrint. In order to get access to OctoPrint, a network cable must be connected to the board and to a network switch. It is also possible to use a wifi dongle. If a network cable is used, the board should respond to the address: http://recore.local

Once the OctoPrint interface is visible, run through the wizard to set up a new printer. After the wizard is done, go to the Klipper tab in OctoPrint and edit the Klipper config file. This is where the bulk of the work will happen.

There is a standard klipper configuration file that comes with Refactor. The configuration file is set up to work out of the box, but it assumes that there is a 100 K ntc thermistor on analog inputs T0 and T3 (bed). If these are not present, Klipper will halt with a warning.

The default klipper config can be used as a starting point for building a custom config file for the printer at hand.

After the Klipper configuration is complete, do a test print to make sure everything is working.

The Recore images will need to be flashed to a USB flash drive, as there is no SD slot on the board. Recore's uboot is designed to attempt to boot from a USB drive if there is no OS on the eMMC.

There are several stages to booting Recore, and depending on which media is installed, the boot process will try and boot either from eMMC, USB host or USB device.

Booting Recore from eMMC, but load rootfs from USB

Using a root file system on a different drive work well if the kernel version is the same on both media. The kernel version has changed between Refactor v3.0.2-RC3 and v3.0.2-RC4. The board will still boot, but will not load kernel modules as expected, including nft that maps OctoPrint to the HTTP port (80).

If the board is working normally and you are able to log in through ssh, but want to try out a new Refactor version you can let the rootfs be loaded from a USB drive (mass storage device):

The board should now be have the rootfs from the USB drive.

This method requires a UART to USB adapter that can plug into a host computer. There is a 4 pin header on Recore marked DBG, where UART 0 is routed. All u-boot and kernel messages will appear here. The baud rate is 115200. If the eMMC is partitioned and has an OS, u-boot will launch right into that. In order to override that and load the boot script from a USB drive, stop u-boot by pressing a key and then write:

Boot Recore from a USB stick using the FEL button

You can read more about the steps needed to boot aboard in FEL mode on the Sunxi wiki: https://linux-sunxi.org/FEL

After upgrading refactor, if the recore board is A5 or older, you can set the device tree to a different version by running the command

After a reboot, you can check that the loaded device tree matches the revision of firmware.

It's also worth noting that the klipper configuration is a bit different between the A5 and A6 revisions. The A6 is the now the default configuration, but A5 is also present for use. It can be found on github or on the board.

The only way to upgrade Refactor is by flashing a new version. In OctoPrint there is a "Refactor" plugin that can aid with this. If Refactor is run from a USB stick, a new version of can be downloaded and flashed on the eMMC. 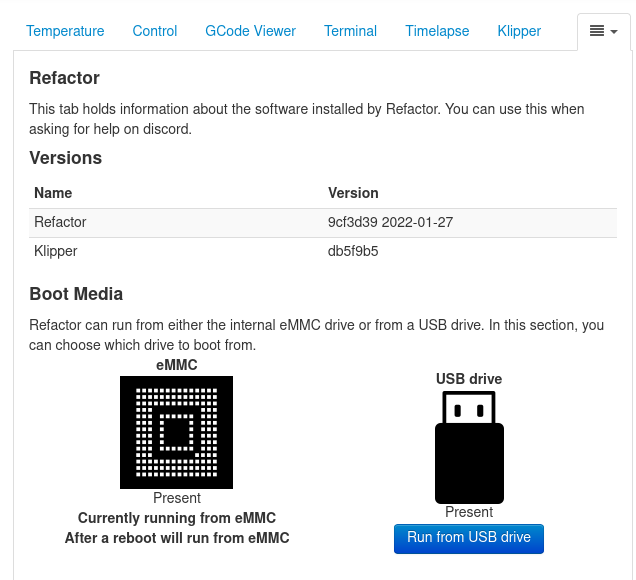 Upgrading Refactor from the command line

To reboot into a USB drive:

Then once the board has booted from USB, you can download an image:

Once the image has been downloaded you can flash that image to the eMMC:

Using Moonraker and Mainsail instead of OctoPrint

It is possible to switch to using Mainsail as user interface to control the printer instead of OctoPrint. The best way to do that is by running some install scripts on the command line:

After that Mainsail should be available from http://recore.local

Mainsail expects the klipper config file to be available in

Move the config file to the right location:

Alter the config path for klipper:

This is not something the regular user would need to do, but documented here for convenience. Place u-boot-sunxi-with-spl.bin in sector 15 (8KB offset) Flash the binary

Note: U-boot needs to be patched in order to use the eMMC as the first (and only) boot device. The changes can be done in "spl_mmc_get_device_index" where dev_num should be 0 instead of 1.

The ar100 has a binary file that is loaded on startup by klipper.service The binary file comes pre-compiled in Refactor, but can be recompiled on Recore (or on a host computer).

The AR100 needs a cross compilation toolchain. For ARM64, it can be downloaded from feeds.iagent.no:

The toolchain has been built with

The toolchain used during automatic testing and is the same used for the CRUST firmware project:

To configure klipper for AR100 and build the binary:

This will produce a bin file located in out/ar100.bin, so it should be moved to /op/firmware

This is the same operation that happens from the klipper.service script, so it can also be done by running

The latest Refactor now does automatic flashing of the STM32 firmware on first boot after a fresh install. This was merged with PR#199 in Refactor on Github.

The firmware for the stm32f031 mcu that is responsible for ADC conversions and PWM for heaters and fans comes pre-installed in the flash of the MCU. It can be recreated on the board using the Klipper build system.

To flash the STM32 firmware:

The Replicape images will be meant to run from the micro SD you flash it to. You cannot boot the Replicape from a USB key at this time. By default, Refactor images do not flash to the eMMC the way Umikaze used to. Part of this is historical - the early betas of Refactor did not fit on the eMMC, but there's another advantage as well: it allows you to test out Refactor on an SD card while keeping your working Redeem config on the eMMC.

If you want to boot Refactor from a USB stick, you need to stop u-boot by pressing space during boot. You must run these commands:

Klipper is run as a systemd service. It should not normally need to be restarted from the command line, but during development it can be necessary.

The log for Klipper is located in /tmp. It can be viewed as:

Klipper can also be restarted from the OctoPrint interface. On the "Klipper" tab, press "Firmware" to restart the Klipper firmware. 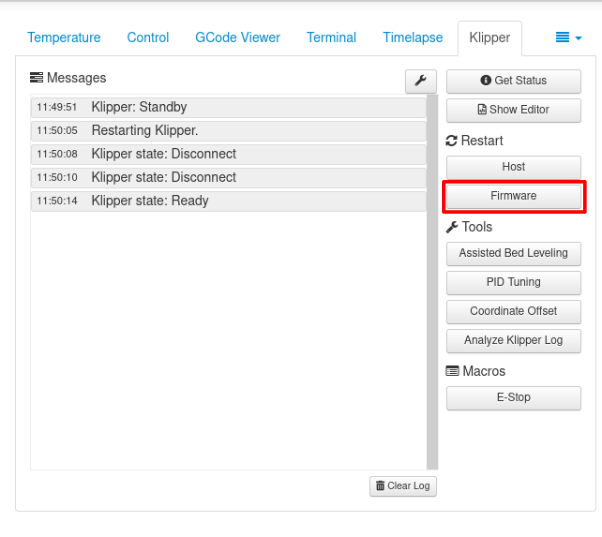 Toggle is started automatically by the systemd service toggle.service. A user is created for Toggle on first boot, but the credentials are not set until a user is created in OctoPrint. Once the wizard has been completed, the Toggle user is active, but the credentials will not be valid until OctoPrint is restarted. Therefore, if Toggle is needed, restart OctoPrint after the wizard is complete.

OctoPrint is stated on boot. If there is a need to restart the daemon, use this command

Refactor uses Ansible as the underlying framework to describe the desired system state. There are many reasons for this:

The ultimate goal is to have multiple decliations of Refactor, providing the user the ability to choose which firmware/software stack to run on their hardware. The following pre-build declinations are planned:

Only the options in bold have been implemented so far, while the others are undergoing various steps in development in the order shown in this list. The Refactor images with OctoPrint are meant to provide drop-in replacements for the previous Umikaze images, including all the extra goodies that were present in Umikaze, like mjpg-streamer, SMB server, and usbreset for the main ones.

The default login is root with password kamikaze. The system will prompt for an immediate password change, to prevent a massive IoT exploitation through the web. Wouldn't want your printer sending out spam or starting to print unauthorized objects, now would we?

Building a runnable image for Replicape

The Replicape runs on a Beaglebone black (or green, without video output), which has a single core ARM processor running at 1GHz with 512MB of RAM. While impressive for an embedded application, it's rather weak when trying to build a system, which can take a lot of time.

There's a significant time gain when building the image from a more powerful host system, then flashing it to memory from an SD card.

The host system can be any ARM v7 or above architecture machine. In this example, the Raspberry Pi 4 will be used as an example, as it has a quad-core arm64 1.5GHz processor with 1 to 4GB of RAM. Any standard linux platform will do, but you will need a build storage space of at least 5GB for the build to succeed. Using a fast SD or a USB3 flash drive can provide higher disk speeds, reducing build time significantly.

To build an image from Refactor for the Replicape, follow these steps:

At the moment Refactor only supports using a debian-based distribution as a basis. Further down the line it will be refactored so that many more packaging systems are supported - this is not an Ansible limitation, but rather simply a developer time limitation.

The goal for Refactor is to allow the end-user to choose a custom software stack, while making installation of those packages easier. In this case, the user will want to learn how to write a simple Ansible playbook - there are multiple examples available in the Refactor base folder (build_full_klipper_octoprint.yml, install_klipper.yml, any yml file really).

Each install_ file will install a specific component with its required dependencies. For instance, if you with install toggle, it will also install the Beaglebone's graphics drivers, required for video output, along with a number of libraries that Toggle is reliant on (such as a custom-built libclutter using the framebuffer output instead of the X11 driver).

To install a specific component, make sure that you have installed ansible. Alternatively you can just run the prep_ubuntu.sh script - the only thing it does is make sure that Ansible is ready to execute any further tasks required.

Once Ansible is installed, just run "ansible-playbook install_klipper.yml" for example. Let it run and it will go through to make sure everything is available upon the next reboot.

After all packages have been installed as desired, reboot the system. A reboot is necessary, as depending on the software installed, kernel modules may be enabled / disabled, kernel versions may have changed etc. These are unfortunately not changes that can be done without a reboot.